While many studies show the negative effects of transport infrastructures on faunal movements, the SYNERGIE project is based on the assumption that they offer land opportunities to be seized, particularly in connection with the implementation of Regional Ecological Coherence Schemes ( SRCE). The objective is to evaluate how and if the borrowing areas and the neglected people contribute to maintaining or restoring ecological continuity. Can they be carriers of biodiversity reservoirs? 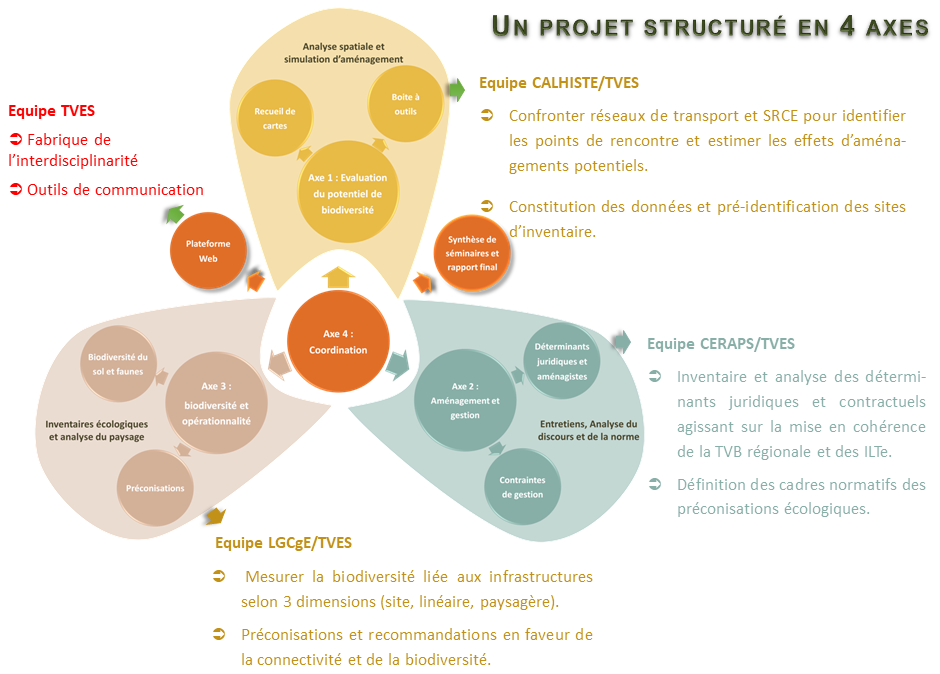 What are the conditions for a viable interaction between biodiversity, ILTe and regulatory constraints?

The study focused on the former Nord-Pas de Calais region and two operators (SNCF Réseau and RTE). Four axes structure the project. Axis 1 "Spatial Analysis" produced a first mapping of the "meeting points" between the ILTe and the SRCE-TVB of Nord-Pas de Calais, the latter served as a basis for discussion between the scientific team and the operators. -Partners on the choice of study sites for Axis 3. Axis 1 was extended by estimating the biodiversity potential of the network rights of the operators' networks and by simulating the effects of development in favor of biodiversity within these rights of way on ecological connectivity between the SRCE-TVB biodiversity reservoirs.

Axis 2 "evolution of discourses and the norm" draws up an inventory of the normative and prescriptive determinants likely to influence the synergy of the objectives of the SRCE with the management of the two ILTe. The legal determinants as well as the management constraints of the owners were identified from the bibliography (internal documents, legislative texts and contracts), interviews with operators and farmers and documentary analyzes of the legislative frameworks and contracts. The first results reveal a shift towards a more "ecological" management, be it in the practices or the discourse, nevertheless dissensions persist.

Axis 3 "Biodiversity, functionality and landscape" measures the biodiversity of sites in three dimensions: (i) at the landscape level via a 360-degree quantitative survey around pylons, (ii) at the site level, through the use of photographic traps to monitor the presence and circulation of wildlife in the vicinity, (iii) at the level of the infrastructures themselves (under pylon and along the railways) by monitoring the communities of the soil fauna to estimate the effects of the management methods put in place at the beginning of the infrastructures. The hypothesis is that depending on the management modality in place, ILTe "pylon feet" would represent a refuge for soil fauna, resulting in greater species richness and greater abundance of taxa.

Axis 4 combines the analyzes in an interdisciplinary, inter and intra-axis perspective. Two annual seminars discuss the methodologies applied and the results of the research. The vocabulary used by each discipline during exchanges is defined in a thesaurus. In addition, a survey was conducted among project members in March 2017 to assess their relationship to interdisciplinarity.

The simulation of the effects of development in favor of biodiversity identifies the portions of territory where targeted actions or cumulative efforts of the two operators could be put in place. Legal analysis confirms the legalization of the landscape, aimed at transforming negative externalities. This project is indicative of materials (contracts between infrastructure managers and owners, charters ...) very rarely apprehended during research. However, the law does not appear as the only lever and must be apprehended according to the practices of the different actors. The analysis of the latter's discourse highlights the persistence of a dissension between the ILTe's maintenance and respect for biodiversity, as well as the weak communication on the actions undertaken by the operators. This deficit is also reflected in interviews with farmers, who would like greater communication from operators on vegetation management.

Finally, the field campaigns show that the composition of faunal communities differs according to the management methods (fallow land, pasture or crop) and their proximity to the pylon (under or near). The potential refuge effect is observed only under the pylons left fallow, so the study did not make it possible to highlight a global positive effect on the abundance and the composition of the edaphic communities. The first conclusions will be refined and consolidated at the end of the SYNERGIE program in 2018.
Recommendations for action

The progress of the SYNERGIE project makes it possible to identify the following tracks, which are primarily addressed to the partner operators:

The short-term perspectives of the project are aimed at its finalization, the CERAMA Nord-Picardie was asked in 2017 to study the terrestrial biodiversity (mammals and micromammals) within the convergence zones studied and to estimate the stake. These surveys will complete the work of axis 3.

In the medium and long term, on the "modeling" part, the integration of other ILTe could enrich the analyzes and the results and concerning the practices, a reconciliation with the chambers of agriculture could be envisaged. Finally, from a legal point of view, the project reveals the need to draw up a typology of contracts, in order to dissociate them from other soft-law documents.

Animation of the project internally

Radiation of the project